This image just came up in my facebook feed: it was taken just a few days ago by a photojournalist in Gaza, Palestine.  I think this demonstrates beautifully the distinction between photojournalism and art.

The image went viral on social media, such as twitter because of is likeness to a famous painting by Delacroix’s, Liberty Leading the People.

The first article I read about this focused more on the asethics of the image and likeness to the artwork than the real story and context in which this image was taken and that shocked me!

But having researched more, it seems that the argument about art versus reality is allowing other writers to push forward the realities of this very real modern day struggle.

Another article by the Independent argues that we should not be romanticising about this and gives a more balanced report.

The Aljazeera News told how Laleh Khalili, a SOAS University professor person, who posted the image on twitter also linked it to Delcroix’s painting generating agreement from other users and ‘creating the narrative’.

Like Dorothea Lange’s migrant mother, the man in the image, Aed Abu Amro, may not personally benefit from this image, but he may indirectly bring the situation to a wider audience.

As it was reported that this idea of ‘liberty’ has been floated before in Gaza, one one wonders if like Lange, the photographer was sent out with list of images to get.  After all it is quite clear from the google search that many people carry flags whilst they are protesting!

Having asked about finding examples of citizen journalism on the CAN forum, one of the students mentioned that he had been involved in the ‘Umbrella Movement’ in Honk Kong in 2014.  When I looked it up I found both the story and images really interesting.

The umbrella movement were a series of sit in protests led by students against the Chinese governments decision regarding reforms to the Hong Kong electoral system.  The protesters who numbered into their thousands totally blocked main roads in Hong

Peter said that the umbrellas were used to protect people from the pepper spray being used by the police and yellow is symbol of the pro democracy movement in Hong Kong.

With lots of people there having camera phones it means there are lots of images of the same incident from different perspectives. This means you’re not getting just one persons view of an event, but many.  So whereas one person’s image may be misleading or misread, the existence of many images of the same thing a more honest view of the event.

So having taken the advise of my course colleagues I looked again for examples of ‘citizen journalism’. Almost immediately during a trawl of the bbc news site, I came across this article:

Arlène Agneroh; the lady in the image, is a 33 year old single lady from the Democratic Republic of Congo. She is successful, educated and attractive.

However, “In a predominantly Catholic country where many women are still confined to the household, marriage is widely seen as a necessary rite of passage”.

Arlène says she was saddened by the fact that this image posted on social media led to friends automatically concluding that she had got married, without asking any questions or checking the facts.

This a perfect example of citizen journalism highlighting a social issue.

The couple posed for picture above after this  image of the two of them together was misconstrued as them being a married couple. 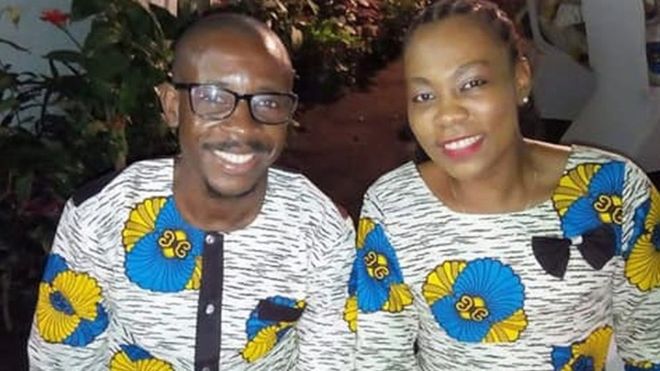 It is an example of images that, when taken out of context can lead to a misleading viewpoint.  However, in doing so it has inadvertently highlighted an issue for women living in the Congo.

The fact that it is now being reported on the BBC shows traditional journalism is picking up on stories from social media and is able to add a more balanced view.

The point of view of any event or scene gives us the momentarily belief we have witnessed this scene.  But in actual fact we have not, only the photographer has and therefore, we don’t really know what is real or not.

In this era for webcams and drones, even the photographer doesn’t have to be there!

Find some examples of news stories where ‘citizen journalism’ has exposed or highlighted abuses of power.

Write a list of the arguments for and against. For example, you might argue that these pictures do have a degree of objectivity because the photographer  (presumably) didn’t have time to ‘pose’ the subjects, or perhaps even to think about which viewpoint to adopt. On the other hand, the images we see in  newspapers may be selected from a series of images and how can we know the factors that determined
the choice of final image?  Think about objectivity in documentary photography and make some notes in your learning log before reading further.

The collection, dissemination, and analysis of news and information by the general public, especially by means of the Internet –

Although I found many many articles and twitter and Instagram accounts dedicated to Citizen Journalism, what it is and what it has achieved, it’s very difficult to find recent images that have been shared which expose abuses of power.  It seems the Citizen Journalism, which first appeared in the early 2000s and was heralded as the movement that would change the face of journalism for ever.

It seems that in a way it has, but with ‘Fake news’ currently being in the spotlight it would appear that citizen journalism has had it’s day.  Ordinary people had an opportunity to show events from their own perspective, but unlike traditional journalism, what they say is not subject to the ethical scrutiny which means that some question the validity / truth of the comments being told.  Having also looked a number of newspaper sites, it is clear that traditional media now uses much more footage shot by ordinary citizens

Study.com defines Citizen Journalism as “the collecting and reporting of information via social media, plubkic platforms and traditional new outlets, either by non-traditional sources or the public”.  Although it is widely thought of as a modern phenomenon there are examples as far back as the 1960s.