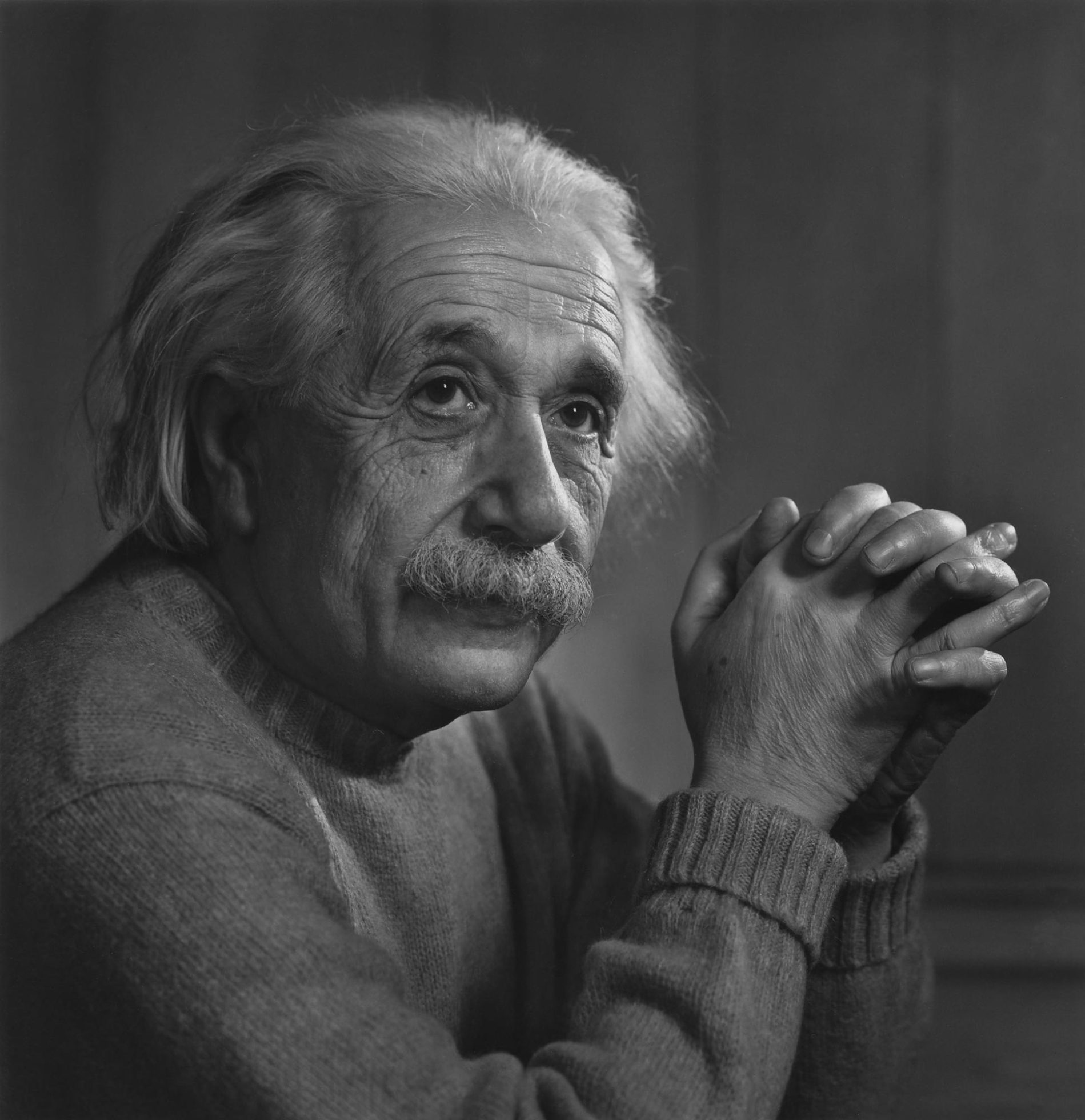 Yousef Karsh said that he had an endless fascination with his subjects’ ‘inward power’. Einstein is not looking directly at the camera, in fact he appears to be staring into space, that kind of stare when you’re thinking and not really looking at anything, perhaps evoking the cerebral power of his mind. He said he found Einstein “Spoke sadly, yet serenely, as one who had looked into the universe, far past mankind’s small affairs”.

There is a sadness to this images but it also feels very intimate. There is a kindliness to his eyes. The image is cropped in close around him, he is wearing a casual jumper, not a suit or formal wear. His hair is unkempt and his hands are clasped as almost in prayer.

His images often include the subject’s hands, but not always so prominently, it feels likely they are given equal importance to his mind.

Karsh has used high contrasts to add depth and mood to the image. He has used a Rembrandt lighting style which is above the subject, pointed down at 45 degrees – thus creating shadows on the sides of the face away from the light, but casting enough light to give a catchlight in the both eyes. This image also has less bright light behind the subject, in order to separate him from the background.

Einstein is quite often pictured sticking his tongue out or pulling silly faces, so this is one of only a few serious images of him. At his funeral in 1955,  J. Robert Oppenheimer summarised his impression of Einstein as a person: “He was almost wholly without sophistication and wholly without worldliness … There was always with him a wonderful purity at once childlike and profoundly stubborn“. Therefore, this is an unusually serious image of Einstein. It is worth noting that in 1948 the year this image was taken, Einstein received surgery to reinforce an abdominal aortic aneurysm, so he may have been feeling unwell at the time this was taken.

Select one portrait to really study in depth. Write a maximum of 500 words about this portrait, but don’t merely ‘describe’ what you see. The idea behind this exercise is to encourage you to be more reflective in your written work (see Introduction), which means trying to elaborate upon the feelings and emotions evoked whilst viewing an image, perhaps developing a more imaginative investment for the image.

The portrait can be any of your choice, but try to choose a historic practitioner of note. This will make your research much easier, as the practitioner’s works will have been collected internationally by galleries and museums and written about extensively. Read what has already been written about your chosen practitioner’s archive, paying particular attention to what historians and other academics have highlighted in their texts.

use this model to write review:

Whilst researching for this exercise, I came across the work of Yousef Karsh, and in particular this image of Albert Einstein. Albert Einstein’s birthday was 14th March, which is also my birthday and also that of my husband and Michael Caine (not a lot of people know that!). Therefore, I felt like had a connection with this image, so have chosen to study it.

Reading Yousef Karsh’s biography, I had quite an emotional response to his life story and found him a fascinating person. A few things I noted of interest:

Karsh’s image was taken on 11th February 1948 at The Institute for Advanced Study:

“At Princeton’s Institute for Advanced Study, I found Einstein a simple, kindly, almost childlike man, too great for any of the postures of eminence. One did not have to understand his science to feel the power of his mind or the force of his personality. He spoke sadly, yet serenely, as one who had looked into the universe, far past mankind’s small affairs. When I asked him what the world would be like were another atomic bomb to be dropped, he replied wearily, ‘Alas, we will no longer be able to hear the music of Mozart.’”

This quote came to my mind when looking at this image. It seems like a lot of Karsh’s images, and you can see the influence of Rembrandt in his lighting of the face

This mark up shows the patches of brightest light and darkest shadows, which indicates that it was lit from above at about 45 degrees angle and slightly behind. there is just enough light peaking around his face to create a catchlight in his eye.

The image is also back lit with a less bright light, to add a bit of separation between the subject and the background.

Karsh said of his subjects:

The endless fascination of these people for me lies in what I call their inward power. It is part of the elusive secret that hides in everyone, and it has been my life’s work to try to capture it on film. The mask we present to others and, too often, to ourselves may lift for only a second—to reveal that power in an unconscious gesture, a raised brow, a surprised response, a moment of repose. This is the moment to record.

I also note that the subject’s hand’s play a part in many of his images.

“Margaret Bourke-White.” International Center of Photography, 12 June 2019, www.icp.org/browse/archive/constituents/margaret-bourke-white?all/all/all/all/0. viewed whilst researching for a Historic Portrait to review for Exercise 1.  Really like her work but it’s more photojournalistic than portrait.